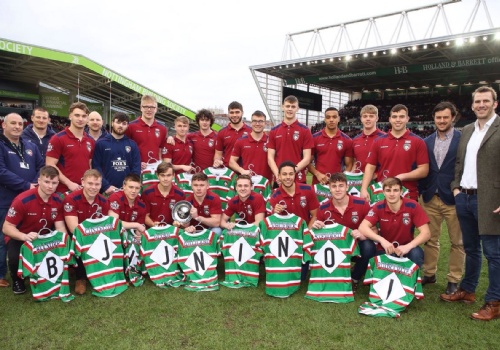 Leicester Tigers Academy graduates were presented with their personalised shirts at the end of another successful season on Saturday, which culminated in them retaining their Academy league winners mantle at Allianz Park against Gloucester.

At half time at Welford Road on Saturday 1st XV captain Sam Eveleigh and OL Harry Glynn were awarded their shirts, and post-match Sam was awarded the coveted Coach's Player of the Year award by departing coach Jamie Taylor.

LGS Director of Rugby Mr Reeves and Head Coach Mr Ellis were at the game against Wasps to see the boys graduate. Mr Reeves said "We are all extremely proud of the achievements of Leicester Tigers U18s, but also of the levels of leadership and commitment shown by our players at this elite level. Sam, Mat Potts and Jack Rowntree have all had outstanding seasons, and in his capacity as captain Sam has been a fine role model for both his peers and our younger players. Academy Manager Dave Wilks and Academy Coach Jamie Taylor have supported our players incredibly throughout their time at Tigers and they both have our thanks and gratitude for all that they have done."