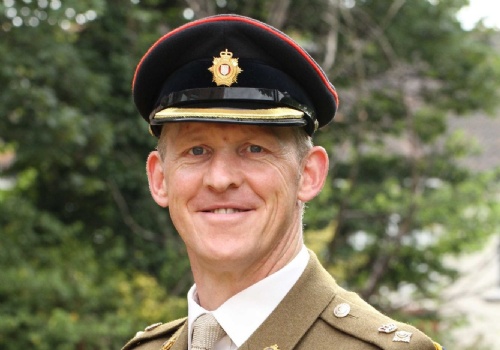 On completion of Officer training at the Royal Military Academy Sandhurst in 1989 he served as a junior officer in Germany, Saudi Arabia/Iraq and Falkland Islands before returning to UK to serve with the Royal Marines. Typically these roles involved the direct leadership of soldiers as well as some functional logistic capabilities for which several staged career courses were provided.

More senior appointments followed that included tours to the Balkans, providing operational logistics to a force of over 7,000, as well as a stint in the Army Headquarters dealing with equipment policy. In 1999 he was given command of a Squadron that deployed to Northern Ireland, providing close transport support to the Infantry and Police; this involved the training and command of over 220 soldiers. A tour in Canada followed to support the training of over 10,000 soldiers annually before returning to the Land Warfare School to train junior officers for promotion courses.

He returned to Iraq in 2005 to lead on the logistic tasking of coalition forces and the support to the Referendum. He was also involved in the mentoring of the Iraqi Army. In 2006 He was responsible for establishing a new Regiment in Germany that in turn deployed to Poland, Iraq and Afghanistan. Latterly he has been working in the Army Headquarters again with responsibility for Logistic Information Systems and the MoD’s support organisation, assisting the Redeployment from Afghanistan and supply chain operations world-wide.